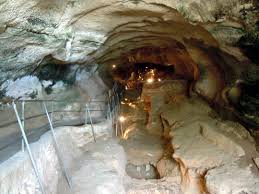 Ghar Dalam is a natural, water-worn cave in the
lower coralline limestone. The site is located about 500 metres from St
George's Bay Birzebbugia right in the South-East of the Island. The cave is an
extremely important site as it reflects the earliest indication of human
settlement in Malta dating back 7,400 years. What makes the cave even more
fascinating is that it was in use during World War II, when it served first as
an air raid shelter and later as a fuel storage depot.

Ghar Dalam is a natural, water-worn cave in the
lower coralline limestone. The site is located about 500 metres from St
George's Bay right in the north-east bank of the beautiful Dalam Valley. The
cave stands 15.5 metres above sea level and is 144 metres deep. However, for
safety reasons only the first 70 metres are easily reached by the public. Ghar
Dalam consists of two parts: the cave; and the museum, which exhibits a
remarkable wealth of finds from animal bones to human artifacts. The cave was
formed by an overlaying river running at right angles to the present-day cave.
The history of the cave and of the Maltese Islands can be decoded from Ghar
Dalam's stratigraphy. Fossil bones of dwarf elephants, hippopotami,
micro-mammals and birds were found in the lowermost layers ½ a milion years
old. Following is another layer where deer fossils were found whereas on the
top layer, or 'cultural layer' holds evidence of the first humans on the Island
of Malta.

In the early 1930s, the museum was opened to the
public and is a piece of history in its own right. Showcases contain bones like
the originals mounted on boards in uniform rows. Teeth are placed in jars or
packed in rows. Everything was designed to impress through its sheer quantity
with little regard given to an exhibit's scientific or educational value. The
mounted skeletons of a brown bear, baby elephant, baby hippopotamus, deer, wolf
and fox all belong to present-day animals and are not however from the cave.

The Garden at Ghar Dalam

Ghar Dalam also has a small garden of indigenous
and exotic plants and trees. Specimens include the native national plant, the
Maltese Centaury and the national tree Tetraclinis articulata. There are also
two large specimens of the exotic and locally rare Wigandia caracasana with its
thick fleshy leaves and violet blossoms. The garden acts as home to native
lizards and insects such as the slow moving chameleon.

The Ghar Dalam ware, produced between 5200 and 4500 BC, is so far the oldest
known pottery in the Maltese islands. The pottery is a local variant of
impressed ceramic wares that are known to be the oldest of their kind in
Mediterranean coastal regions. The pottery is associated with the spread of
agriculture in these areas.

Fine and coarse wares characterise Ghar Dalam phase pottery. The finer category
is often gray in colour with variants of brown occurring in a few cases. The
surface of fine ware is normally burnished. A distinctive characteristic of
this category of pottery is decoration, which is almost entirely absent from
the coarser ware. The decorative techniques include impression, incision and
groove cutting. Decorative motifs ranged from simple random or rowed
impressions, vertical lines, C-shaped impressions highlighting bases and necks,
as well as a series of linear patterns consisting of parallel lines, hatched
bands and hatched triangles. Two distinctive forms are commonly found in fine
Ghar Dalam ware. One form is a small deep bowl. The other is a globular jar
with wide or closed neck.

Ghar Dalam coarse ware is thicker than the finer pottery. The fabric is dark
grey or black and very gritty. Surface colours vary from grey, dark brown, buff
to light reddish brown. The surface finish is visibly less refined than the
decorated ware. The commonest forms consist of deep bowls with straight or
slightly curved walls.