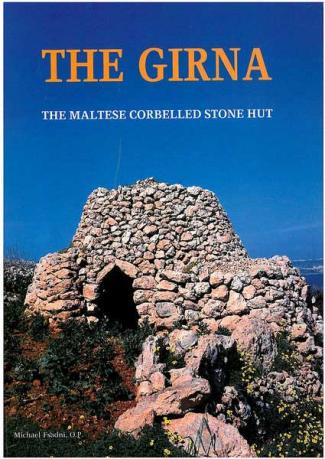 Nothing typifies the Maltese countryside more than the ubiquitous dry-stone wall that wind their way all over the land dividing the hot, dry soil into tiny parcels, from which the farmer ekes out an existence (Il-hajt tas-sejjieh). There, in the middle of it in the countryside of the western and northwestern part of the island lies the "girna", the Maltese stone hut.

The "girna", is a single room erected to meet the needs of farmers and herdsmen. It has a double wall built of undressed stones, which are left unplastered. Internally, its ceiling is shaped like a dome, while the external watt is usually circular, although it can be square or rectangular or, in rare instances, oval-shaped. Its convex-shaped roof is covered with fragments of rotten rock and stone and sometimes with sand and lime, and rarely, with ground pottery (deffun).

The Maltese "girna" looks an extremely plain structure; its beauty ties in the skill of its construction, built as it is with fairly sized stones ably laid next to one another. Since the "giren" are mostly located in the west and north west of Malta, where there are large quantities of loose limestone rocks on the surface, many of them are constructed with such material. The "girna" has one horizontal slab, or else is arched or triangular in form.

There isn't fixed rule that determines the size, height or width of the "gima"; it is probably built according to the needs of the owner and the actual skills the builder. The most beautiful and the largest circular "giren" are to be found in the stretch of fields and rocky ground between the Red Tower and Cirkewwa, while the largest square ones are to be found at Ix-Xaghra Il-Hamra,in the limits of Manikata.

Although some Maltese did use the'giren' for habitation, these structures were originally built to meet the personal needs of farmers and herdsmen and for the raising of live stock. Very often it was necessary for farmers to work fields situated a long way from their farmhouses and they had to have somewhere to shelter during the hot summer hours or during some sudden downpour.

In this shelter or "girna" they used to keep the food and drink they took with them and any small children they could not leave behind. In it they kept their tools, stored potatoes, onions, hay, etc. Some farmers used to dry figs, tomatoes and carobs in the suit on the roof of their "girna".

Today, the "giren" are almost completely abandoned because their owners do not have any further use for them. There are still many "giren" in the Maltese countryside, but a large number of them have collapsed or have suffered damage. As such, the future of these primitive structures part of Malta's architectural heritage, is not at all heartening.